The Charente Gourmet hamper, gastronomy of the west of France 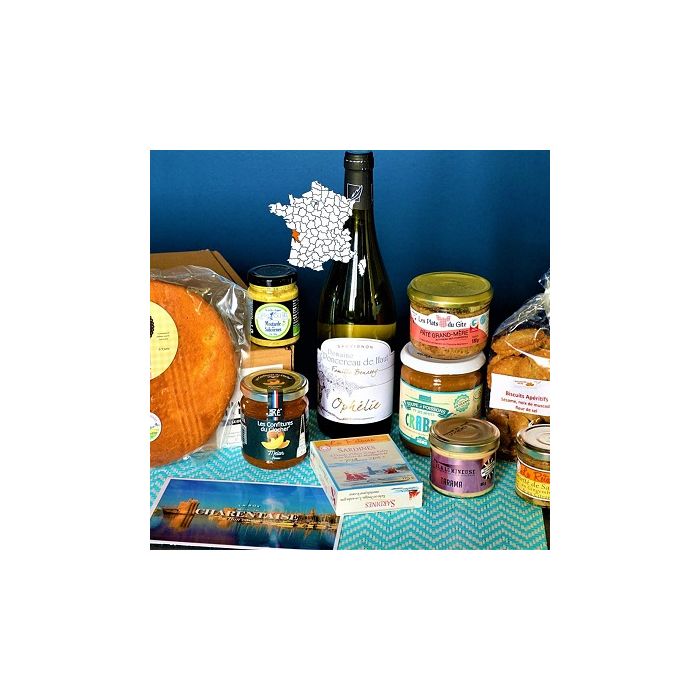 This month La Gourmet Box invites you to explore the coastal region of Charente-Maritime, which naturally boasts a wide variety of scrumptious sea delicacies but also offers surprising discoveries on land. A gourmet hamper full of delicious finds that you definitely don’t want to miss!

Details on our Charente gourmet box products and artisans below.

OUR GOURMET GIFT box from the Charente region, A DELICIOUS FRENCH FOOD AND wine hamper FOR THE MOST DISCERNING FOODIES

Experience the succulent delights of France west gastronomy, as you eat your way through this fabulous gourmet box. 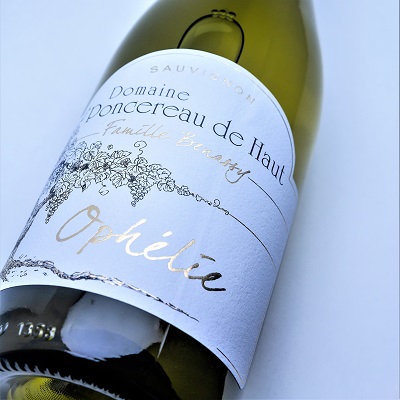 When Jean-Claude Benassy took over his parents’ vineyards, most of the surrounding wineries were making wine for cognac and Pineau des Charentes, but he decided to become one of the first vintners in Charente to produce fine wine from sustainable agriculture. And he certainly wasn’t wrong!

His children Aurélie and Florian have carried on his legacy and created a lovely Sauvignon that earned one star in the famous Guide Hachette.

With a choice bouquet of lychee and grapefruit and a fresh, full-bodied, balanced mouthfeel with hints of white peach and citrus fruits, this excellent Sauvignon is ideal for accompanying the seafood delicacies in your Charente gourmet box. 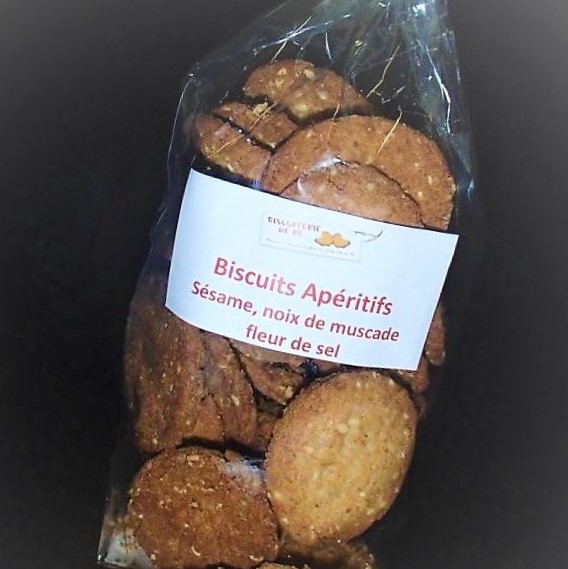 On Île de Ré, our artisan makes delectable traditional Charente biscuits with only the finest ingredients.

These savoury biscuits are sure to revolutionize your taste buds... 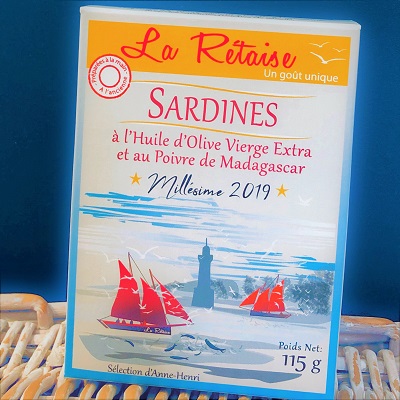 Fans of tinned sardines know there’s nothing finer than vintage sardines in oil: like a good wine, they improve over time. After years of ageing, the sardines have mellowed to perfection: the backbone is practically dissolved, and the flesh literally melts in your mouth.

And our artisan’s sardines are a real treat: prepared by hand according to an old recipe as soon as the boats bring in the day's catch, the selected fish are fine and have no scales. After being cleaned by hand, they are fried in premium oil and packed in extra virgin olive oil with a pinch of Madagascar pepper.

You can savour them now or wait a while... they only get better with age! 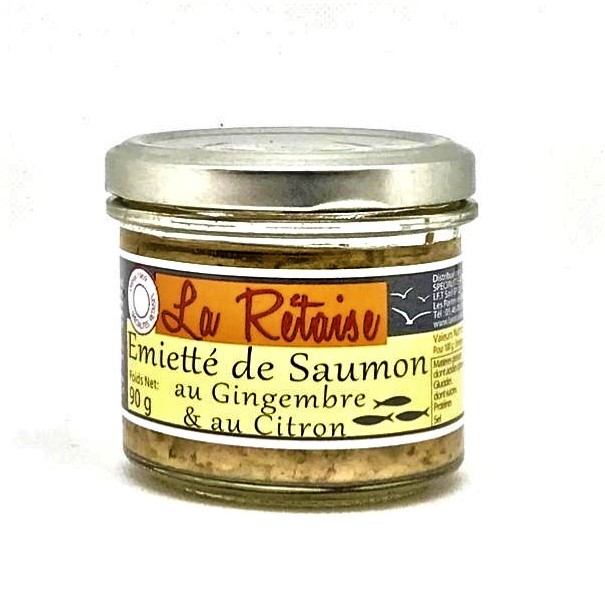 Our Charente feast continues with a delicious ceviche-style marinated salmon, with a festive gourmet hint of ginger, made from carefully selected ingredients without any artificial colouring or preservatives.

We look forward to hearing your rave reviews!

The authentic Homemade tarama (the "clear one"!) from the Isle of Oléron (120g) 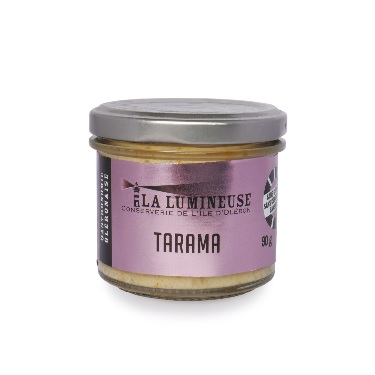 We wanted to present you a family business on the island of Olerón that directly uses the resources of the sea brought to the port by the fishermen to produce magnificent products.

You will taste here a homemade tarama and no doubt that you will enjoy the difference: not the striking pink of the supermarkets.... but the pale one, without colourings or preservatives where the flavour of the smoked cod eggs is enhanced by this authentic recipe. On toast or small blinis, this tarama is a true feast! 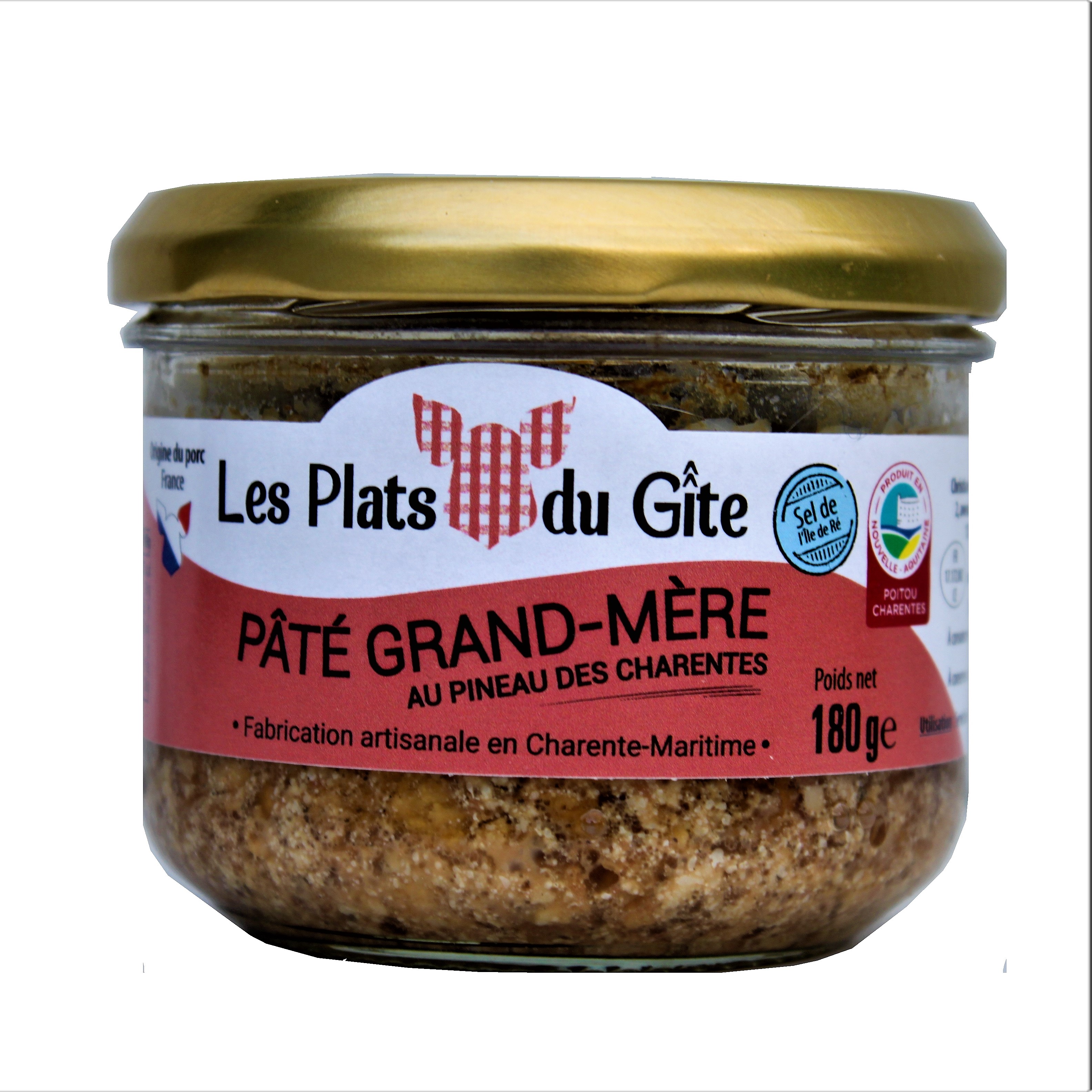 Made with pork from local pig farms in the Poitou-Charentes region, this genuine Charente pâté has plenty of character thanks to the dash of Pineau.

Spread on a generous slice of farmhouse bread for a taste of heaven. 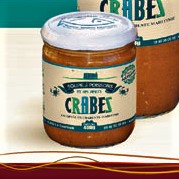 The secret to a good fish stew lies in a few basic principles and common sense: quality fish, a harmonious blend of spices and culinary expertise. And our artisan has mastered this art to perfection.

First, he prepares a vegetable stock with carrots, leeks, potatoes, onions, white wine and Charente butter. He adds a secret blend of spices and then the fish, which he always purchases at the Cotinière fish market on Île de Oléron. After several rounds of stirring, blending and cooking, our artisan obtains this amazing fish stew...

Soup lovers, you’re in luck! Warm over low heat without boiling. Top with croutons and grated cheese and serve piping hot with a glass of the dry white wine included in your gourmet hamper. 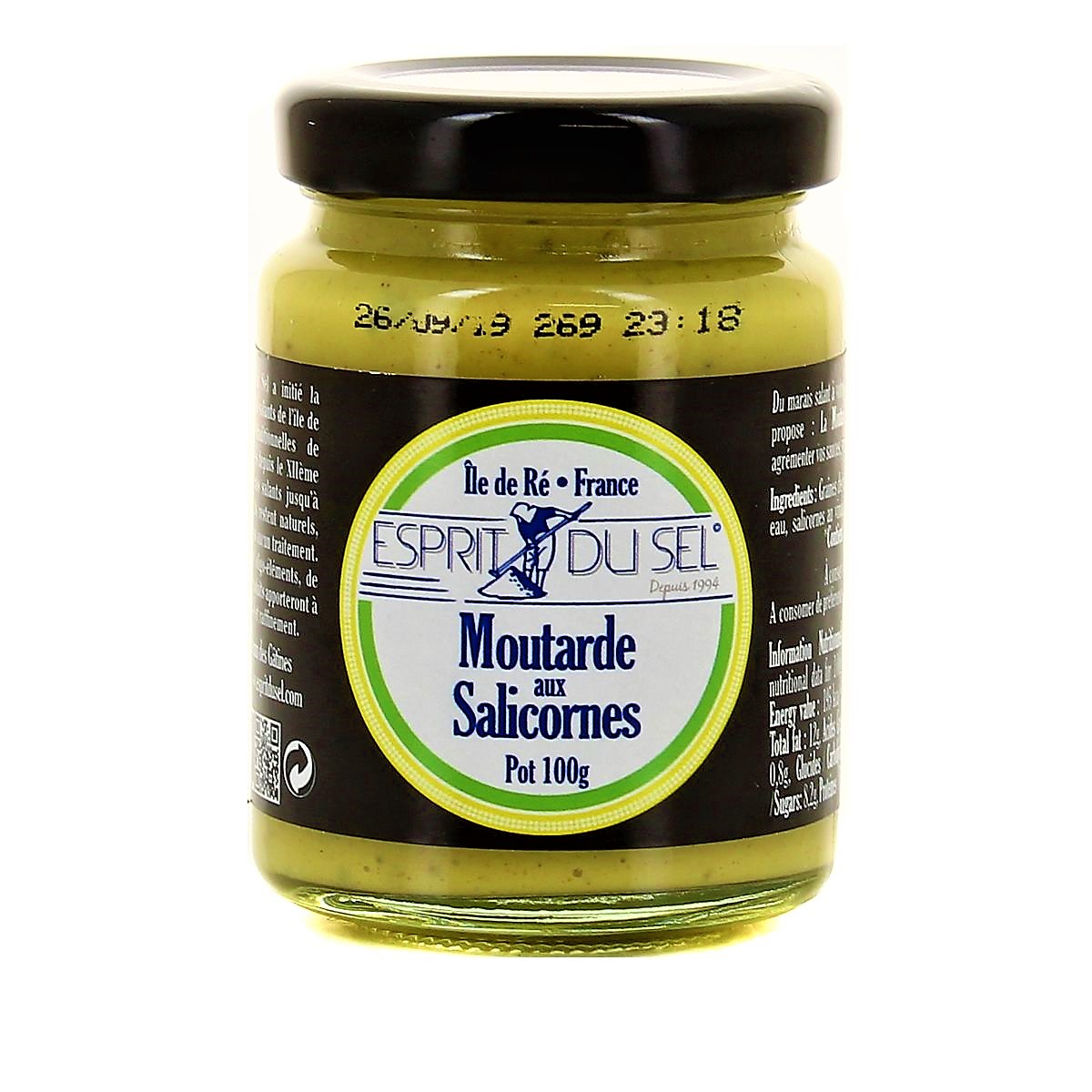 This fine mustard was made with Île de Ré samphire, also known as sea asparagus, a halophile or “salt-loving” plant harvested on the edge of the salt marshes in summer.

A golden nugget of gourmet mustard...

Chérubin, delicious crisp pastry with raisins and a dash of Pineau (270 g) 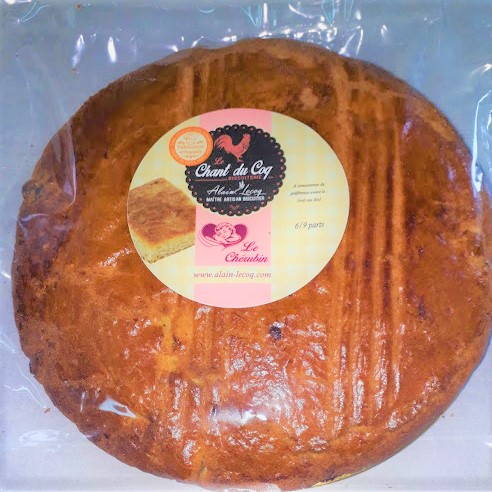 There’s no better way to finish this scrumptious tour of Charente than an exquisite Chérubin created by Alain Lecoq—master artisanal baker, s’il vous plaît—whose passion is concocting culinary masterpieces in his Saintes laboratory. Stepping into his workshop is a genuine treat for the senses!

This fabulous crisp pastry made with healthy, all-natural ingredients is sure to be a hit with Charente’s foodie fans. 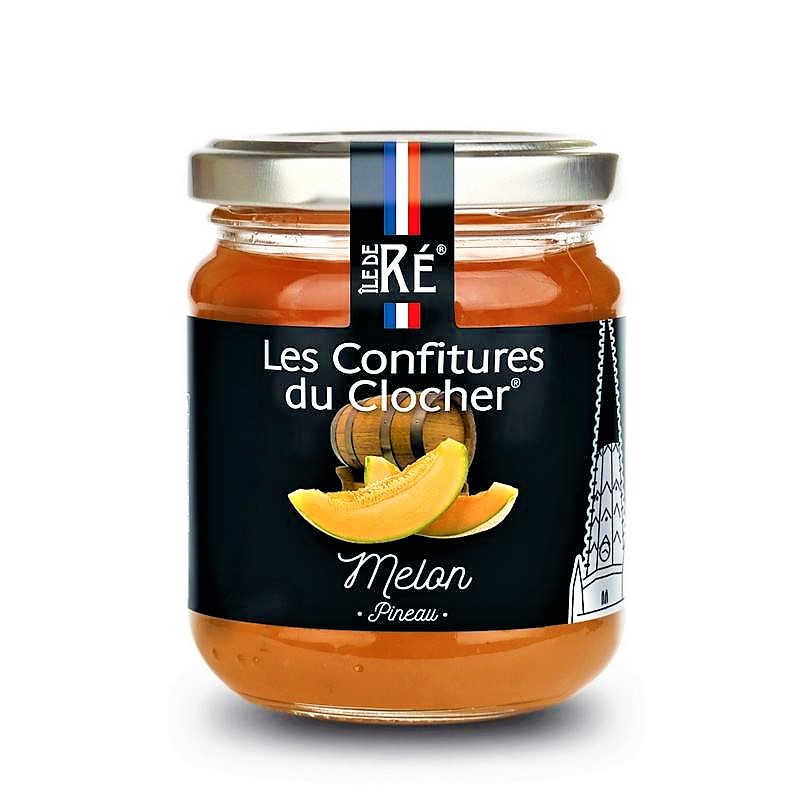 Located on Île de Ré, our artisan makes exceptional jams from the choicest ingredients, using no chemical products or preservatives and with an original flair that sets his products apart from the rest. Of all the jams we tasted, this was the one that really set our taste buds tingling.

Plus, Charente is known for its luscious melons, making the decision even easier. And the added dash of Pineau is simply delicious. Grab a spoon and prepare to be delighted!

This month, our French gourmet box of the Charente-Maritime region gastronomy in LaBoxDuMois website: excellent rating! 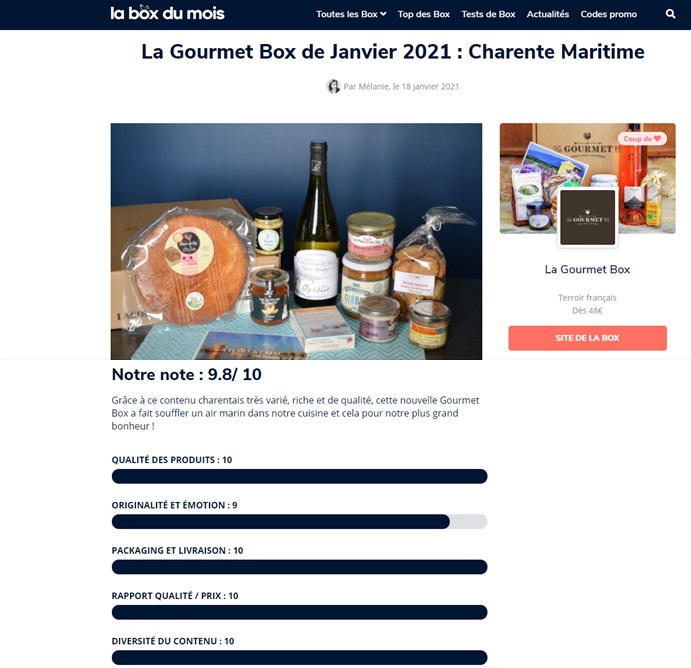