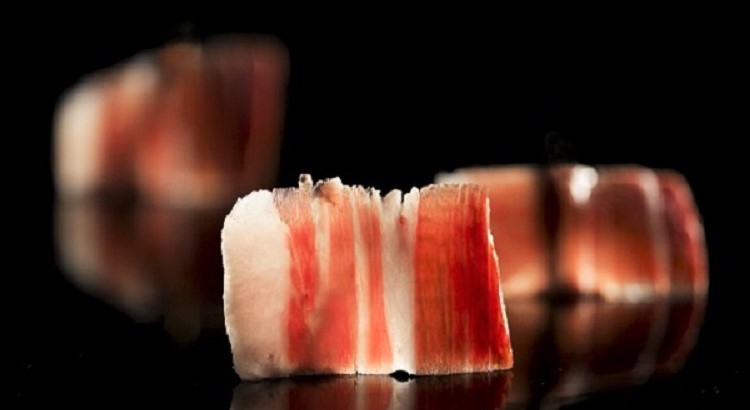 But why is the Iberian ham or Pata Negra de Bellota so good?

100% Iberian Bellota pata negra Ham, the reasons for its excellence

For some, it may be the best ham in the world, but the Pata Negra de Bellota is in any case a jewel of Spanish gastronomy.

Pata negra de bellota, a unique breed and breeding for an exceptional ham

A 100% Iberian bellota ham, what many people call a pata negra ("black legs") de bellota, the Iberian breed with a characteristic black coat, is a ham that comes from Iberian pigs (100%), reared in total freedom in extensive Spanish pastures called Dehesas (these are like meadows dotted with oak trees whose acorns are the delight of the Iberian pig). It feeds only on natural pasture, aromatic herbs, roots and especially bellotas ("acorns") during the montañera (the "acorn") period. If you ask for "bellota" in Spain, make sure that you are not served acorns!...

What does this mean?

Firstly, the "purity of the breed": the vast majority of so-called Iberian hams, which we sometimes call pata negra, are in fact the result of crossbreeding between different breeds of pig. In fact, it is estimated that only 5% of the so-called Iberian pigs in the Dehesas of the southwest of the Iberian Peninsula are 100% acorn-fed Iberian pigs (bellotas). A hybrid Iberian pig is the result of crossing a 100% Iberian mother with a father of a European breed (Duroc for example): these are pigs selected for their high productivity but which obviously develop flavours and aromas distinct from those of the 100% Iberian pig (patanegra). The producers we have selected for you only raise 100% Iberian pigs, i.e. from a pure Iberian breed of father and mother. The taste is reflected...

Then, to obtain this sesame (the black label for these patanegra de bellota hams) the producer is obliged to raise his 100% Iberian pigs in total freedom from the time they are 2 months old until the age of their "sacrifice" around 18-24 months. No supplements of flour etc... The Dehesa of the south-western peninsula of the Valle de los Pedroches ensures the best feed for the 100% Iberian pigs of Orobeio, our small producer of patanegra de bellota ham. to be able to obtain a unique meat to create this exceptional pata negra de Bellota ham.

During the montanera, the pigs can travel up to 14 kilometres a day to find the acorns, the central element of their diet and responsible for their exceptional organoleptic qualities, properties that help reduce "bad cholesterol" and improve cardiovascular health. 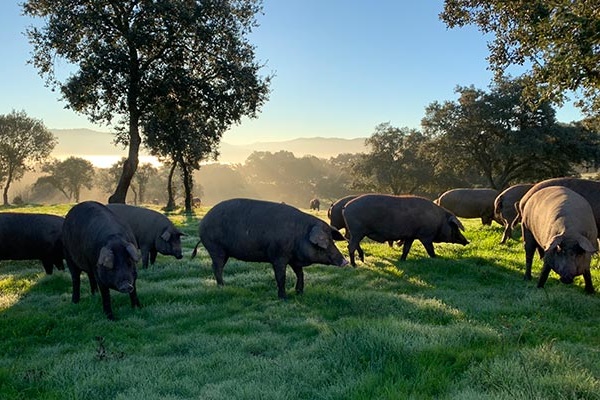 During its first year, the Iberian pig or patanegra feeds not only on acorns (bellota) but also on other foods available in its natural environment, such as wild fruits, roots, mushrooms, herbs, aromatic plants and other dried fruits... It is this varied and completely natural diet that provides the exceptional aromas and flavours of the different products made from 100% free-range Iberian pigs, starting with pata negra de bellota ham.

It is also thanks to the physical exercise that the purebred Iberian pig undergoes to find its food through the Dehesa and to its adaptive capacity that fat infiltrates its muscular tissues, giving them a unique texture that translates into an unequalled flavour of its flesh: you will feel it when you taste your pata negra de bellota, the "petals" (small hand-cut slice) of ham literally melt in your mouth: a pure delight!

You will find in our Gourmet Spanish Tapas Aperitif Boxes Spanish sausages of the highest quality, starting with Bellota pata negra ham, which are completely natural, without colouring or preservatives, gluten-free and lactose-free, and which will simply give you a unique taste experience.

Our Iberian ham Gourmet Gift Box will take you into the exceptional world of Spanish cured meats with the tasting of genuine black label pata negra de bellota accompanied by a crianza de la Rioja wine and other typical Spanish gastronomic delights.

With our Bellota Gourmet Gift Box, you will be able to taste the genuine Iberian ham or pata negra bellota ham in all its forms from a small and unique producer: lomo (acorn-fed cured porked loin) de bellota, "jamón de bellota" (the actual pata negra ham or acorne-fed cured ham, hand-cut as an exceptional ham should be) and the "Paleta de pata negra de bellota" (100% Iberian acorn-fed cured foreleg ham), as well as other exceptional Spanish cured meats accompanied by a great Spanish wine.

And eventually with ourTapas Deluxe aperitif set, you can offer or treat yourself with top-of-the-range tapas typical of what the Spanish enjoy around Christmas: sliced pata negra de bellota ham with a great cava (the Spanish sparkling wine which marries magnificently with the ham), a delicious Manchego cheese accompanied by its quince paste, exceptional cold meats, the famous turrón (like a Spanish nougat) in 2 different forms among other specialities. Enjoy your visit!

If you taste the genuine iberian ham, you will want to go for more! 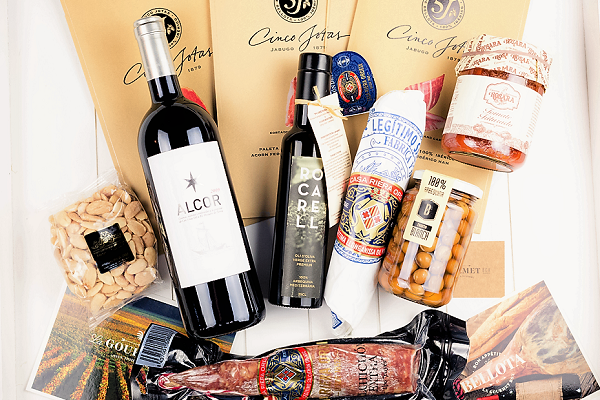 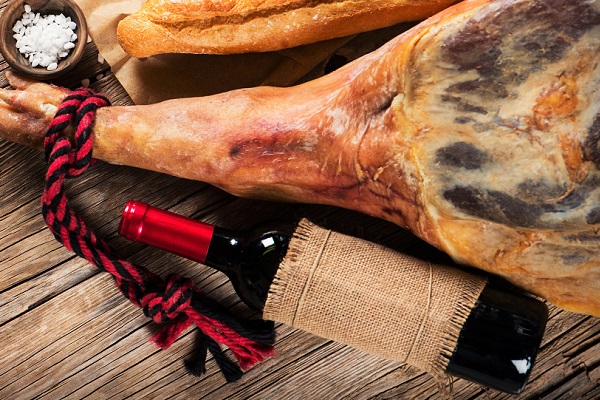 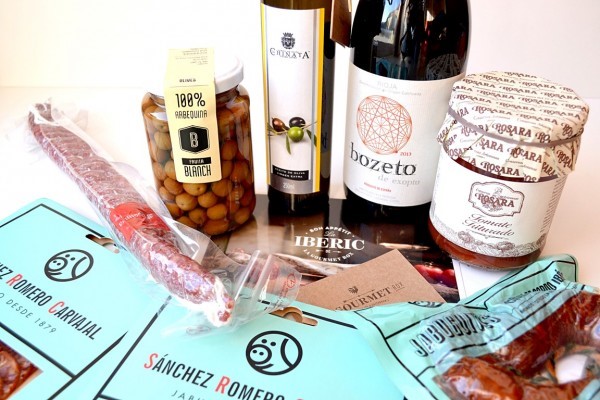